A new way to protect
the St. Pierre River

India’s Ganges, New Zealand’s Whanganui, Colombia’s Atrato and, closer to home, the Magpie River, well known to white-water connoisseurs – these are great waterways that hold symbolic value for their people. And they have another thing in common: they have legal personhood status, with rights that can be defended in court.

These rights arise from a new ecological justice movement, which, rather than viewing nature as a resource to exploit, is inspired by Indigenous principles that recognize the profound connection between humankind and the natural world, principles found in some religions as well as in human rights. Seventeen countries have now adopted similar principles. 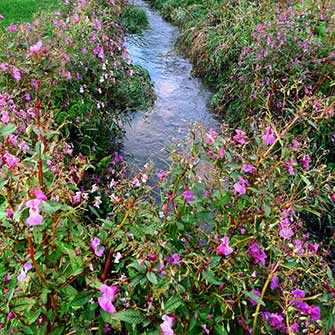 The story of the Magpie River inspired Les Amis du parc Meadowbrook‘s fight to save one of the remaining visible sections of the historic St. Pierre River, which once flowed from Mount Royal to Verdun; it is time to claim legal personhood for the St. Pierre and grant it the rights that can be used in its defence.

The St. Pierre River is one of 36 streams that once flowed across the Island of Montreal but are now buried underground. The declaration states that other remaining waterways on the island of Montreal should also be granted legal status and rights. The declaration also expressed support for the efforts of the International Observatory on the Rights of Nature to have similar status for the St. Lawrence River and its tributaries recognized by the National Assembly.

WestmountMag’s readers are invited to join us in becoming guardians of the river and its rights. Please send us an email to have your name added to the declaration at lesamisdemeadowbrook@gmail.com

We, the undersigned, declare that, like the Magpie River, which has been recognized by the regional county municipality of Minganie and the Ekuanitshit Innu Council as having legal personhood, the St. Pierre River that flows on the Meadowbrook golf course in Lachine (lot 1 292 249) and whose status has been established in the Supreme Court by the Ministère de l’Environnement et de la Lutte contre les changements climatiques (Meadowbrook Groupe Pacific c. Ville de Montréal file no. 500-17-079150-135), must also be recognized as having legal personhood.

This watercourse is one of the last visible sections of the St. Pierre River, which once flowed from Mount Royal to the St. Lawrence River opposite Nuns’ Island. The river played a role in Montreal’s early years and had a significant impact on the City’s history through transport, agriculture, populating of the territory and industry. Urbanization and industrialization have taken their toll on the river and it was largely buried in the sewer system.

We, therefore, declare that the river shall possess the following rights:

We declare that Montreal’s other waterways should also be granted this legal status and these rights. We also fully support the efforts of the International Observatory on the Rights of Nature to have a similar status for the St. Lawrence River and its tributaries recognized by the National Assembly.

We will act as guardians and representatives of the St. Pierre River to protect its rights.

Read other articles about the environment

Louise Legault is a member of the Les Amis du Parc Meadowbrook steering committee. The group has defended the St. Pierre River and the Meadowbrook golf course from residential development for 30 years in order to create a nature park linked to the Falaise Saint-Jacques and the Sud-Ouest through the dalle-parc. lesamisdemeadowbrook.org