Hair at the Mainline Theatre revives the Age of Aquarius

In 1967, Montreal was revelling in the golden year of Expo.

This coincided with the dawning of the age of Aquarius off-Broadway in Manhattan with the opening of Hair – The American Tribal Love-Rock Musical. Hair finally hit Broadway, the movies and encouraged about 100 other rock-based musicals over the years. Jesus Christ-Superstar, Godspell, Grease and The Wiz come to mind.

This anti-Vietnam war, free love, pot-smoking, hedonistic classic was last presented in Montreal 31 years ago at the Spectrum Theatre for three days. Thanks to Noelle Hannibal and her In The Wings Promotions, it was re-mounted for an all too brief four-day run last week at the intimate Mainline Theatre.

Ms. Hannibal had recently produced fine local concert versions of Chess and The Who’s Tommy that really, well, rocked. This time, she opted for a full-scale production.

Somehow, I have had a deprived adulthood and had never seen Hair before. The anti-establishment feel of then still resonates today with movements like Occupy and Black Lives Matter.

This intriguing show has some key Canadian content in the person of McGill grad Galt MacDermot who composed the music after meeting book and lyric authors Gerome Ragni and James Rado. He was himself crew cut with a wife and four kids and a house on Staten Island when he collaborated with these two longhaired extroverts from the East Village.

Most Broadway musicals average 16 songs. Hair has 32. This many leave few moments for spoken dialog so the plot advances through intricate sinuous stage movement and dancing. This was wonderfully delivered by director/choreographer Nadia Verrucci, who confided to me that she too had never seen the show before. I was gratified to confirm that her handling of these tasks was in the spirit of the original Director, Tom O’Horgan.

The 17 person cast features 8 principals and 9 ‘tribe’ members with nary a weak spot among them.

Claude, the pacifist who eventually dies in Viet Nam (originally played by Mr Rado) is here Mathieu Samson. This character, for reasons never explained, hails from Manchester, England, the tile of one of his songs, which include I Got Life and Where Do I Go?

Sheila, their friend, is here belted out by producer Noelle Hannibal herself. She sparkles with I Believe in Love and of course Good Morning, Sunshine.

Jeannie, another friend, is Rosie Callaghan, featured in Air.

The tribe harmonizes beautifully with the key refrains of Hair and Aquarius.

The large cast was energized by the musical chords and beats of the band led by musical director Ian Baird (Keyboard) with Sebastian Balk-Forcione (Drums), James Parm (Guitar) and Alex Kaiser-Smilbert (Bass).

Hair ran at the Mainline Theatre from November 23 to 26.

Ferdinand Cheval: The Postman
Who Delivered a Palace 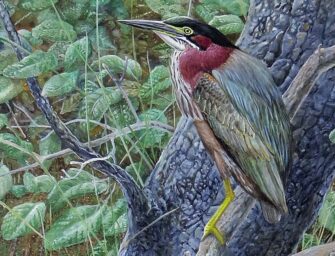 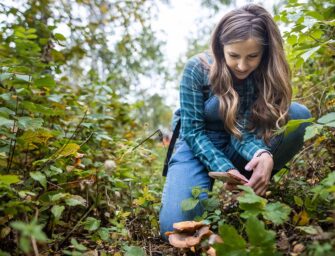