In one of G. Bernard Shaw’s 50-plus plays, I forget which, there is a scene where a couple is about to welcome some dinner guests. “Now dear”, reminds the wife, “be on your best behaviour – don’t discuss religion, politics or sex.” “But my dear”, responds the husband, ”they are the only subjects worth discussing.”

That recall flitted through my mind as I viewed Porte Parole’s latest essay in its specialty, documentary theatre, The Assembly.

This show, which has toured Quebec, mostly in French, has a short run in English at the Segal Centre from February 16 to 20, preparatory to its venture into the United States.

Earlier creations by Porte Parole, such as Seeds and The Watershed were based on actual verbatim from conferences, government hearings and the like, as organized by playwright Annabel Soutar.

Here, she is joined by two actor/playwrights, Alex Ivanovici and Brett Watson, in scripting this show based upon some conversations amongst some (unsuspecting?) dinner guests. 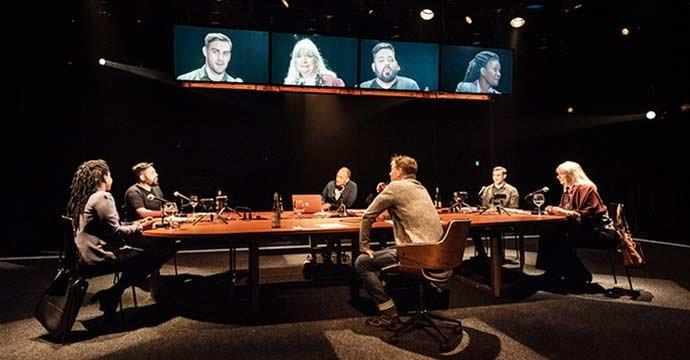 The topics change depending upon the country or city or venue visited. To me, it seemed like an artistic version of a marketing “focus group” although the subjects raised and responses thereto ranged from immigration to white supremacy to sexual orientation to anarchy. And of course, capitalism vs. socialism.

Imaginatively directed by award-winning Chris Abraham, the four participants each entered the sounding room with stutter-like moves. Guiding their conversations were moderators Marcel Jeanin (fresh from his role as God in the Centaur’s Paradise Lost) and co-playwright Mr. Ivanovici.

To me, it seemed like an artistic version of a marketing “focus group” although the subjects raised and responses thereto ranged from immigration to white supremacy to sexual orientation to anarchy. And of course, capitalism vs. socialism.

The excellent actors included the versatile Jimmy Blais as a gay Jewish man with leftist leanings, Tanja Jacobs as a loud-mouth lady more prone to rightist attitudes, Akosua Amo-Adem, a shy girl of colour not sure what to make of it all and Sean Colby, a young man seeking to be politically correct.

A new innovation was the company inviting four random audience members to come on stage and continue the conversation for 20 minutes. I was amazed at how readily volunteers grabbed the opportunity – usually audiences need a bit of coaxing.

I am sure Porte Parole’s entering the USA will draw a lot of attention at this time with so many fireworks going on with government actions and the Democratic party debates. Lots of competition out there with opinions swirling on Fox News, NBC, CNN, ABC, The Young Turks.

Still nothing like live theatre to really involve viewers. Speaking of which, viewers so inclined may wish to also scan my earlier review of Porte Parole’s Watershed at the Centaur in 2018.

The Assembly plays at the Segal Centre until February 20.