Hedwig and the Angry 2.54 cm
rocks at Cabaret Mado

In The Wings Promotions introduces Tony-winning musical to Montreal

The rock musical Hedwig and the Angry Inch (2.54 centimetres in now metric Canada) got its start Off Broadway in 1998.

It won The Obie award, played for two years and went on to tour the USA and many countries around the world, reaching Broadway in 2014 and winning a Tony.

A film adaptation followed in 2001. 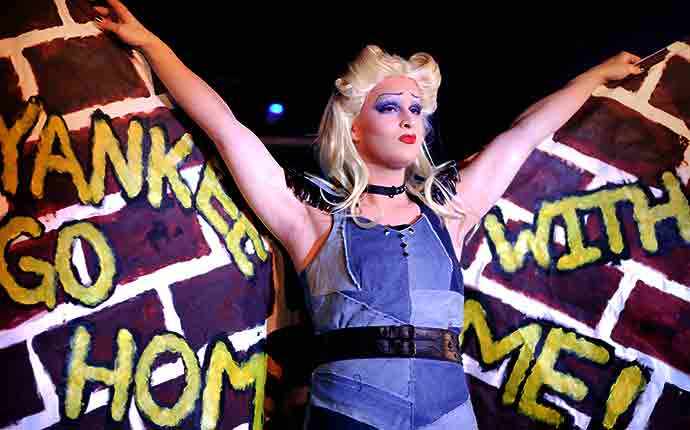 It is now staged in Montreal by who else than In The Wings Promotions whose founder Noelle Hannibal has recently brought us concert versions of rock musical classics Chess and The Who’s Tommy as well as a full scale Hair. Read my review ‘Hair’ reprise a rewarding event.

Unlike the large Hair cast, Hedwig is a two-hander albeit backed by a four-piece live band.

I had wondered why Director Nadia Verrucci needed to be the choreographer as well on such a small stage with one, often seated, actor, but Hedwig’s crisp movements bespoke a fine invisible hand behind his/her bodily movements, some lying on the floor. 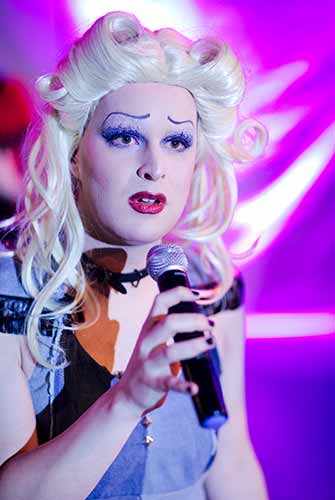 As to the title character Hedwig, it was played with full creditability by Andrew Morrisey, a Canadian living in New York who on a visit to Montreal noticed Ms Hannibal’s call for auditions.

Ms Hannibal herself played Hedwig’s meek husband, Yitzhak. A handsome woman, viewers may not recognize her at first with charcoal mustache and drab jeans and leather jacket.

The text to this show was written by John Cameron Mitchell. I hate to give away the details of a complicated plot but, as many know it by now, suffice it to say that it involves East Germany, a botched sex operation, professional jealousy, gender confusion, wigs, capes and ten songs.

The music and lyrics were written by Stephen Trask, who visited here for the show’s Montreal opening at Cabaret Mado.

One song, The Origin of Love goes back to Aristophanes as reported by Plato.

Another, Sugar Daddy, was punchy but to my ear, not as satisfying as the jazz/country tune on the same subject, Sammy Kaye’s Oh Daddy, especially the Julie London version.

Wicked Little Town, which had a reprisal, brought back memories to me of Ewan MacColl’s Dirty Little Town, especially as rendered by the Irish group The Pogues.

Many have felt that much of Trask’s music was reflective of David Bowie and Iggy Pop. I am in a minority of one in that I do not enjoy Bowie and dislike Iggy. Ah well, à chacun son goût.

Anyway, the staging and energy were great fun and we look forward to Ms Hannibal’s next promotion wherever, whenever.

Hedwig And The Angry Inch concludes at Cabaret Mado on November 21 and 22.
514 613-4597
inthewingspromotions.com