The Yin and Yang of it all

They say it takes one to know one. Such is the case with Kelli Jayne Irvine NP; the certified practitioner of Traditional Chinese Medicine (TCM) and acupuncturist was once so riddled with pain, she recalls crying with agony as she crawled on the floor to the bathroom. Tall and elegant and radiating calm, it’s now hard to imagine Irvine as anything other than the essence of health. She readily admits she is unsure how her life would be today had she not stumbled upon the ancient practice of TCM that helped transform her from a very sick individual, to a healthy, pain-free one.

A 10-year-struggle
“I am doing great,” says Irvine, who moved from Toronto to Montreal in 2014 to be with her boyfriend, to whom she is now engaged. “It’s amazing. I stopped medication in 2010,” she says, referring to the pain meds she was on, adding that she still treats herself with herbs and an occasional acupuncture session. Irvine’s story may resonate with people because she was stricken with an ailment no one was able to identify, even as she spent close to 10 years searching for answers before finally being helped with TCM.

“I was in and out of hospitals,” says Irvine. “I went to the Johns Hopkins Hospital in the U.S. and I saw two specialists. They never gave me a diagnosis. The answer was always another drug”.

Irvine’s situation became so dire, she had to quit her job. She went to eight specialists in Vancouver and Toronto, traditional and alternative, and even with the medication, nothing really helped. One day, her father suggested TCM. “I didn’t know much about it, but I took his advice,” says Irvine. “I noticed the most significant change from acupuncture and Chinese herbs. It was a slow change, and it did take a while for me to feel a lot better, but I noticed things were going in the right direction. It still took years. I was extremely sick and I would say now I am extremely healthy,” she says with a smile. 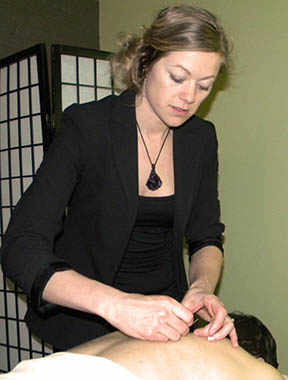 Kelli Irvine NP examines the placement of acupuncture needles in her client’s back. Image by Marlene Eisner.

Setting up in Montreal
While still on the road to health, Irvine enrolled in a four-year program at the Toronto School of Traditional Chinese Medicine, where she received her diploma as a Traditional Chinese Medicine Practitioner, graduating 2012. She was building a successful practice in Toronto when she made the move to Montreal. This last year has been quite an adjustment, she says, as she received her Quebec acupuncture certification, is working on improving her French and setting up shop. These days, she practises part time at a facility the West Island and has a private office in the Nordelec building in Griffintown (1751 Richardson St.) sharing space in U.N.I.Training, owned by Chris Ince. It is also where she and her fiancé, Bruce Zigman — who is trained as an athletic therapist and now uses his skills to give detailed training programs for cyclists — work out and stay in shape. “It’s a very open concept,” says Irvine of the space at U.N.I.Training. “I’d say it’s a good atmosphere with very friendly people.” Irvine says people can come to her as they would a traditional medical professional. “TCM is a complete medical system on its own created a few thousand years ago,” she explains. “I want people to come to see me who have any issue — stomach issues, sleep problems, infertility, back pain — TCM is another form of medicine,” she says. “When you know something is off, you come to me.”

TCM is based on the Chinese concept of Qi (pronounced chee and referred to as vital energy) and the notion of balancing yin and yang, the opposing forces in one’s body. The belief is that disharmony leads to illness and disease. Acupuncture, which can be traced back as far as 2,500 years, is a vital part of TCM, along with the use of Chinese herbs that are individually prepared for each person according to their needs, good nutrition and massage, called tuina.

Irvine’s treatment room at U.N.I.Training is cosy, private and imbued with gentle lighting. She says acupuncture is relatively painless, and many people are so relaxed they fall asleep, as the needles, once in place, must remain there for several minutes. For clients who don’t want needles, Irvine can perform tuina massage. Irvine does a full medical history with each client to find out their issues before deciding on a course of action. The individuality of treatment is what sets TCM apart, says Irvine. She likes to cite the example of people taking the same pain medication for a headache.

Practising what she preaches
Irvine admits that there are no miracles and that she can’t guarantee a cure for everything. She acknowledges that there is a place for Western medicine.

“Western medicine is good, I’m not against it,” she says. “I think they can be complementary. I believe in an integrated system; sometimes people need medication, I just think there are a lot of things we can treat or prevent in a different manner.” And the proof, as they say, is in the pudding — or in this case, in the improved health of not only Irvine, but of Zigman, who used to have exercise-induced asthma. Since being treated by Irvine, he is asthma-free. “I had been on a puffer since I was a kid,” says Zigman. “Now I exercise harder and better than I have ever before and I haven’t used my puffer in over a year and I have no symptoms of asthma.”

There is no doubt, then, that TCM has helped Irvine and Zigman with their individual health issues and to develop their own special brand of yin and yang as they balance their work and personal life together in Montreal.

Marlene Eisner is the former editor-in-chief of the Suburban Newspaper and is the recipient of eight journalism awards, including first place for best breaking news story, best column, best news feature, best feature page and best overall community newspaper. She is a McGill University graduate (BA psychology 1979) and graduated with a BA in journalism from Concordia University in 1985.